When Melca Salvador is unable to complete the stringent requirements of Canada’s Live-In Caregiver Program, she is issued a deportation notice. The spunky caregiver and activist, who has a 7-year old son born in Canada, decides to fight the deportation. This short «guerilla-style» documentary charts the ups and downs of the 18-month campaign to stop her deportation until the final victory.

February 27, 2009 — We are saddened that our dear friend, Melca Salvador, has died after a long and heroic battle with cancer here in Montreal.

Melca, a former domestic helper from the Philippines, leaves her young son, Richard, in the able hands of Evelyn Calugay and Melca’s friends at the Philippine women’s group PINAY. They have been a strong force at Melca’s side these last few years.

Our thoughts go out to Richard and the family she left behind in the Philippines.

Melca was always a fighter and won her struggle to stay in Canada – with the help of many supporters here and around the globe – when the Canadian government tried to deport her. Melca, because of the birth of her son, had been unable to fulfill the Canadian government’s strict criteria under the Live-in Caregiver Program (LCP).

Your memory lives on, Melca. 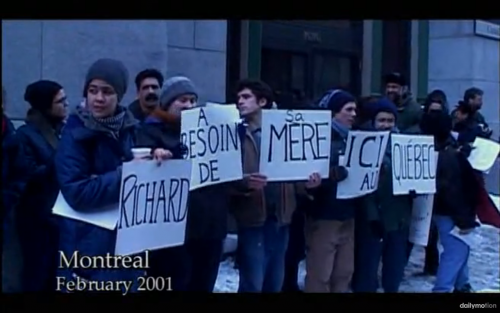