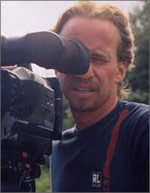 After he completed a Masters degree in cinema at Concordia University, Martin Frigon decided to devote himself to creating documentary films. Director, scriptwriter, researcher, sound recordist… he produces and develops projects both in fiction and documentary.

Some of his films include Mourir au large  and  Make Money. Salut, bonsoir ! , which won the Audience award and the Environment award at the Portneuf Film Festival, and Mirages of El Dorado which won the Grand Prize at the Festival Internacional de Cine Digital in Argentina and at theFestival International du Film d’Environnement in Paris.