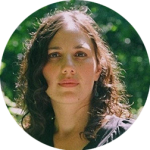 Marlene directed and produced her first feature-length documentary film Figure of Armen, to be released in November 2012 by Diffusion Multi-Monde. She returns to the homeland of her ancestors and questions what it means to be an Armenian in a region devastated by natural disasters and changing borders following the break-up of the USSR. Marlene is of Armenian descent and grew up in Lebanon.