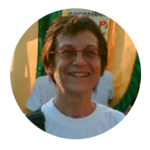 Marie Boti is a co-founder of Productions Multi-Monde with Malcolm Guy. She has been making documentaries since 1987, sharing the lives and struggles of the people and communities she films with. These close relationships are perceptible in her work. Marie creates documentaries that deal with social and political issues at home and abroad, particularly the Philippines. She is a long standing member of the Centre for Philippine Concerns in Montreal.