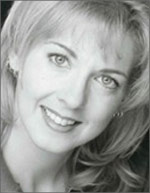 Laura Turek has worked in both documentary and fiction. Her recent television credits include; Mars Rising, a multi-million dollar behind-the-scenes look at the technologies and science that will transport the first humans to Mars; Buy Me, a lifestyle series for HGTV about the high stakes and stresses of buying and selling homes; Out in the City a docu-soap series for Life Network and Pride Vision and Women Warriors, a series profiling female Olympic athletes for CBC. Laura is currently directing What’s That About?, a look at what makes up everyday things we take for granted, for Discovery Canada.

Cherry Fruitbread, her first fiction short, won the Audience Choice Award for the Best Canadian Short Film at the Montreal World Film Festival in 2003. Best in Snow, her second short, was one of the scripts selected for production at the Moc Doc’s competition and was screened at Hot Docs in Toronto where it placed runner-up Best Moc Doc of the festival.