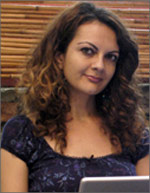 Eylem Kaftan was born in Turkey. Eylem completed a Masters degree in Cinema at York University in 2002, where she worked as a teaching assistant and wrote her thesis on the identity crisis in post-1980 Turkish cinema.

Her first documentary, Faultlines, investigates the aftermath of the earthquake which hit Turkey in 1999. It won Best Short Film and the Jury Prize at the Planet Indie Film Festival in Toronto.

Eylem then wrote and directed Vendetta Song (2005) produced with DLI Productions in co-production with the National Film Board of Canada. This gripping hour long documentary about her personal journey into the honor-killing of her aunt in a small Kurdish village in Turkey was broadcast on Vision TV and Télé-Québec and has received several awards including CIDA Prize for Best Canadian Documentary on International Development at Hot Docs; the Quebec Film Critics Association Award for Best Medium Length Documentary; Best Documentary, Calgary International festival; and Best Documentary, Female Eye Film Festival.

Eylem has contributed to several Canadian documentaries on social and political issues ranging from immigration and women’s rights to mental illness and culture shock. Eylem is presently working on her new documentary on Kurdish youth.