This is the story of the Caribou Inuit family who were Canada’s last nomads. With the voices of three generations, they tell of their journey from an independent life hunting on the Keewatin tundra to the present, when they take the reins of the new territory of Nunavut on April 1, 1999. Amarok’s Song: Journey to Nunavut is the result of close collaboration between Ole Gjerstad, a southern Canadian, and Martin Kreelak, an Inuk. Martin is a member of the family in the film and one of its principal characters. Amarok’s Song speaks through three distinct voices. Elders, led by 80-year-old Amarok and his wife, Elizabeth, take us back to a time marked by incredible hardship, pride and a startling spiritual universe. Martin’s generation has a foot in each world: they have borne the brunt of cultural clashes between southern and Inuit societies—and they are the ones who will set the course for their new homeland. Teens and young adults who were born in the settlements and grew up with satellite TV speak through their own short videos stories, shot by students at Baker Lake High School.

A shorter video, Journey to Nunavut: The Kreelak Story (48 min), is also available. It focuses on Martin Kreelak’s generation and that of the elders, represented by Amarok and his wife, Elizabeth. 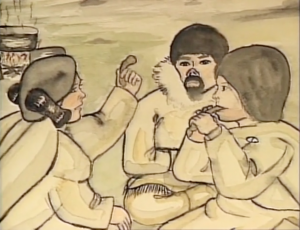